In the garage sorting through project stuff, threw out two boxes of damaged ribs and thought today would be a good today to work on something specific. The project came with a tailwheel and I found another yoke (for lack of a better word), maybe it was intended to be a replacement, but it's all on the bench. I had no idea that these things were so complicated and, after looking at it, probably worth disassembling and cleaning every few years depending on how much you're flying. It looks like if you maintain it and replace the wearable items it will last forever. If things get old though and begin to wear, maybe rebuilding it isn't an option if it's too far gone?

First up, the wheel gets removed. The nut is on one end, the grease fitting is in the head of the bolt on the other end. In between are a few washers, two bearings and the inserts that hold the bearings in. Here's a few pics showing the details and the order of assembly.

The pivot point comes apart next. The grease fitting goes into the top of the bolt that the wheel pivots on, the fitting can be unscrewed but the bolt seems pressed in so I'm going to just leave it in there unless it falls out on its own. It's probably better that it's in there tight given that loose is the other option and probably not good. There's a bushing that the whole wheel assembly pivots on.

The magic of a full swivel and still steerable tailwheel appears to depend on a few small springs. The flat steel spring is what gives it that steerable but still pivoting operation, it catches the notches in the yoke to steer and gets dislodged for swivel mode. The pics might make it hard to see how it would work, ask questions, I can try to explain it better.

The whole assembly rides on three (look like) bronze bushings, one above and one below the yoke and another up top in the head that the assembly bears against when the weight is on the wheel.

And lastly, up in the body of the pivot point, the bronze bushing is seated on a sacrificial phenolic disc that is probably meant to protect the inside of the aluminum casting. And the pivot bolt to wrap it up.

I think that this pic shows why the tailwheel would only steer in one direction, the notch in the yolk is sharp on one side and rounded off on the other. It's got to be sharp for the wheel to lock on to the yoke making it steerable. The little sliver piece with the keyway in it protrudes ever so slightly as it rolls around the center allowing it to push the flat spring out of the notch, releasing the wheel assembly to freely pivot.

That last photo is the key. That three sided spring will break now and then, and the outer housing notches can get worn. Replace those, and you have a new tailwheel. The spring is held by a pin that must be driven out and in. Not difficult.

That's good to know about the spring. My yoke, Aircraft spruce calls it the "arm assembly", is bent and the notch is worn but there's an extra so I got lucky there. Will replace that spring but everything else looks good. Strip, prime, and paint, then reassemble and wait to get the new frame home.

Can that flat spring be bent out a little to make it seat in the notches better?

Parts page at AS 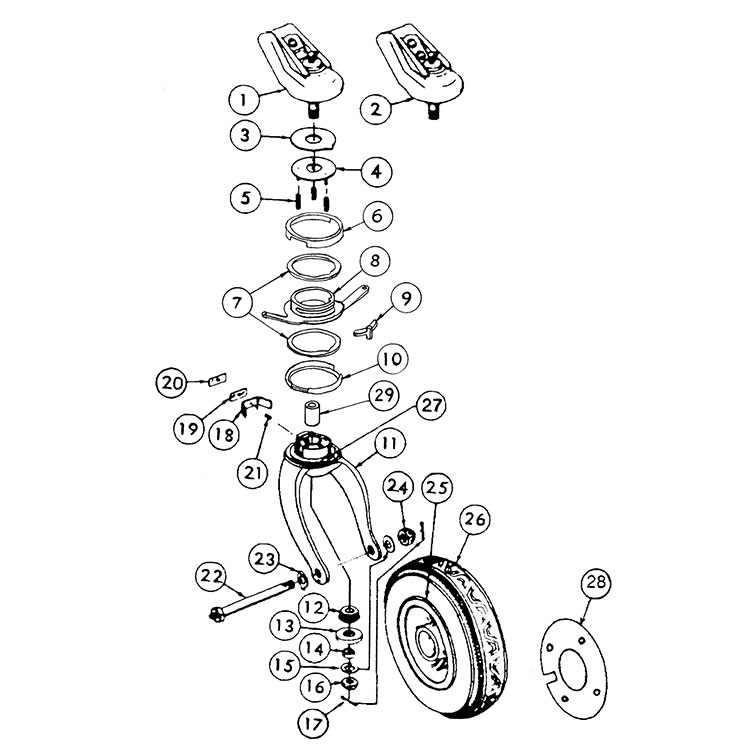 SCOTT MODEL 3200 TAILWHEEL PARTS The Scott Model 3200 tailwheel, with 8-inch pneumatic tire, is designed to give years of trouble-free service.

Came across this video just now about tailwheel rigging


they made this one also

Finally got around to the tail end after an oil change today, the pivot point grease fitting took a lot of grease and I kept pushing more in to push the old dirty stuff out. Also greased the axle fitting, it too took a lot of grease. I guess I didn't realize a lot of the tailwheel grease is leaking out during normal use. After seeing all of the little parts up close and personal I'll be greasing the tailwheel pretty regularly from now on.
B

Brave soul. Every time I grease a tailwheel it shimmies. I go for resistance in there.
If it does shimmy, tighten that nut underneath. Worse comes to worst, clean all the grease out and put a thin film on the important parts.

haven't heard of that before Bob. those parts in there are kind of delicate, I'm surprised it's thought that less grease is better. Are you steering chains ever so slightly tight like in the two videos posted above?
B

Nope. I run loose. I have rebuilt several of these, then taught a Cub student how to do it. He is better at it than I. I have never had much trouble with breakage, but others have had serious shimmy problems. I usually snub that nut up a bit and tell them to lay off the grease for a while.
Kingpin angle is, of course, important.

My Decathlon is the last taildragger in our fleet with the 3200. I am tempted to try an API back there - the real problem with the 3200 is if you let the pressure get low - the tire will roll off there, and taxi gets difficult. I carry a spare, inflated, with tools and a cotter key. That fixed my flat tire problem (that, and 50 psi.).
B

Well, come to think of it, maybe the Dec has tight springs. It is factory stock back there. I shall check tomorrow.
E

Thank you for saying thank you.
E

Steve Johnson has 3 YouTube Video's that are helpful as well for the Alaskan Baby Bushwheel maintenance. He really likes grease.

Dilemma time, I need everything back from the Rudder Post. Including the attachment piece.

The Scott 3200 Tailwheel Assembly in the used market seems to be the same price as the ABI Tailwheel Assembly new. By the time I refurbish a used/tired Scott 3200 should I go ABI new instead? ABI has 2 models the 3200 with conventional tire and tube and the other unit accepts a baby bushwheel. Any comments there? With 8:50 x 6 Mains operating on uneven grass, would the baby bushwheel be a better option? Thinking a 25 / 75
mix between Grass and Tarmac Landings.

Is the Scott TW a superior product?

ABI appears to have bought Scott and is now marketing parts and assemblies under their name. I don't know if the baby bushwheel line is something Scott had made or if ABI designed it new themselves.

Word on the interwebs is the baby bushwheel doesn't like pavement.

I've got the 3200 which I find has less shimmy with lots of grease and a well pumped up tire.

I've got the Alaskan version of the 3200 on my kitfox brand new.
E

75% tarmac is your “driver.” Until Bush puts a tailwheel lock on that larger wheel version, you need the standard size, with 50 psi. If your off-airport work is too rough, ease in a little forward stick until you are slow.

A shimmy can be a “no joke” affair with a big heavy wheel.

I heard the same thing - the Bushwheel is apparently identical, but at a much lower price. The French apparently bought Scott and tripled the prices.

I find myself wondering how the API would perform on an ACA product.
E