I am gathering some information on the installing a Standard or Sports Shoulder Harness on my 7GCAA Citabria. Does anyone have pictures of the installation? I want to install the front harness without having to weld a tab to the top frame. I found the Hooker Harness STC SA312CH instruction. I just want to get a better idea on how it is supposed to be installed. What is your take on Wag-Aero vs Hooker Harness?

That diagram is how I install my Hookers several years ago. No hassles.
B

My Decathlon came from an experienced acro pilot. Front shoulder harness has no connections to seat back.

Saturday I again got in a Cub with those incredibly difficult AmStd belts. After much fooling around I got them snapped. When we landed it was not snapped. Give me Hooker or early Air Force. No inertia reels. I am using Silver Parachute, with an AmStd lap backup. I have photos somewhere.
B

Don't have the front seat shoulder harness photo - here is my rear seat belt, and maybe a shot of the J-3 front harness:

I'll have to get a picture of my hookers. Er, you know what I mean.

My front has a single attach point for the top of the shoulder belts.

Bob Turner said:
My Decathlon came from an experienced acro pilot. Front shoulder harness has no connections to seat back.

Saturday I again got in a Cub with those incredibly difficult AmStd belts. After much fooling around I got them snapped. When we landed it was not snapped. Give me Hooker or early Air Force. No inertia reels. I am using Silver Parachute, with an AmStd lap backup. I have photos somewhere.
Click to expand...

Thanks for the awesome reply.

question for any one with the hooker wrap around attachment over the pilotes head, did they cut holes in the wood structure to attach the seat belts? Looking at mine I will need to make some any pictures will be great thanks the rear seat looks straight forward but not so much the front.

On the way to fly right now. I'll try to remember a pic or two
G

The front seat shoulder harness attach is now using a welded cross brace shaped like a triangle to be welded to the cross tube behind the pilots head to keep the pressure from bending the tube in an accident. ACA sells the kit. You might find an old attach point over and behind the left shoulder that you can attach the shoulder harness to. It is a little awkward but works.

This is correct you can buy this and weld it in, but Hooker offers seat belts that do not require this bracing or welding if I’m understanding correctly the picture at the start of this thread shows this. On my plane 1979 7ECA this looks to require making holes in the wood former for the head liner at the rear of the skylight. This is what I’m trying to figure out Either way looks like I’ll need to remove some wood.

The diagram shows 2 slots routed in the wood. Regardless of Hooker’s diagram I would confirm you are comfortable with the strength of that cross frame. My Scout frame is different and has 2 cross tubes with a welded tab for the seat belts.

That "cross frame" is the rear spar carry-thur...
Should be strong enough...

Rear spar carry thru tubes are under some compression. Even the slightest pull could have them collapse.

Picture: you successfully land in the trees, but a tree on each side brings you to a sudden stop, putting a bunch of force on that tube. The trees put compressive force on it, and your harness aims its vee- shape - um - at your head?

Bob, you are of course correct that the spar carry thru are mostly loaded in compression. And yes, pulling too hard on the center of a loaded beam could cause it to fold (column buckling). Unless you somehow managed to load it in flight it won't buckle and during a crash when you ARE pulling tension (decelerating) on the center of the beam (spar carry thru) the wings are no longer compressing the beam because they aren't lifting the airframe. The Hooker design is even better due to having the dual harness attachment points further outboard and closer to structural weldments.
I've seen the aftermath of a 7ac that got planted IN (as opposed to ON) a sandbar in a river...both occupants survived with harness bruising and the carry thru held up ok...as opposed to almost every other tube in the fuselage...

JMPO and YMMV
Chris
B

True, if you do not land in the trees. See my hypothetical - if you hit trees that tube will be in more compression than any flight load ever.

That’s why we go for the left rear cluster. Some say the angle is too great. I don’t see it as much of an angle at all.

Starting to look at installing a Hooker 2 belt ratcheting harness for the front seat. Each belt requires a separate attach point. The new ACA's have 2 lugs. For older aircraft like mine that lack 2 lugs, I have seen alternative instructions posted that allow for the 2nd belt to be routed around the frame member under the floor inside the seat lugs.
I am planning to pull my floorboards this winter, so having a 2nd lug welded might not be a huge effort. Access would be pretty easy.
Thoughts on pros and cons of each method?
B

Con for the welding is you have to have approved data, and you have to protect against fire. 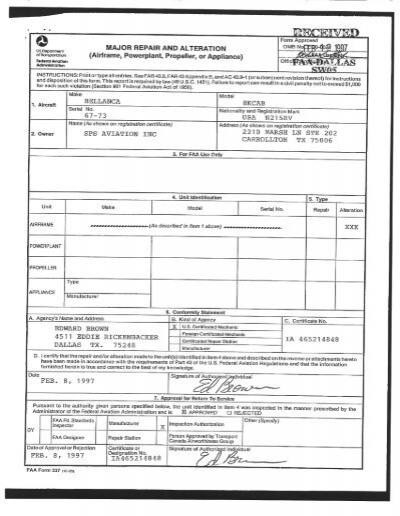 Approved data should be obtainable from ACA, since 2 lugs is on the TC now.

Looking more at the instructions, the wrap-around method seems pretty simple. Perfect is the enemy of good enough.
N

Hooker sells an "American Champion Weld-in bracket kit (3-1711)", which could be the U bracket that Norm describes, or the triangular bracket that Goodyear shows up above. Since my headliner is in, I would guess welding is not an option for me.

The STC also shows an option to get a 2 point anchor and fasten to the rear spar carrythrough tube with buckles. That looks pretty simple to me, and will distribute the load a bit better than a tab in the middle.

But my question pertains to anchoring the lower belts to the floor. That is a bit of a threadjack, sorry, but seemed useful to consolidate discussion rather than spreading out over two threads.

The Hooker aerobatic harness with 2 lap belts and a ratchet requires separate anchor points for each belt. The current factory method is 2 tabs on each side of the seat, welded to the lateral fuselage tube. Inner tab is for the seat frame and one belt, while outer tab is for the other belt. However, since older aircraft do not have 2 tabs, the STC provides an alternate installation method by wrapping the belt around the fuselage tube inboard of the seat frame mounting points, as shown below:

That seems pretty easy. However, welding another tab seems like it would be doable too, since the floorboards are much easier to remove than the headliner. So the question stands: are there any pros to the 2 tab method over the wrapping method shown above?

Edit: the 2 tab method is depicted on ACA Service Letter 433, available on the ACA website. Drawing:

Here is a picture of the 2 lugs the way the factory does it now, stolen from FB: